A Taste for Tea

By the time that the new villa at Chiswick was reaching completion in 1729, tea was the most fashionable refreshment in England. Having been introduced to this country in the 17th century, when it was drunk for its supposed medicinal properties, it became a symbol of luxury and status. Until 1784, tea was subject to heavy taxation making it an expensive commodity. It was enjoyed by the wealthy, such as the owners of Chiswick House – Lord and Lady Burlington and, later in the 18th century, the 5th Duke and Duchess of Devonshire.

Tea was imported from China to England by the East India Company, established in 1600, together with other ‘exotic’ goods such as silk and lacquer (‘Japan’) furniture. The old house at Chiswick, which was joined to the new villa, was furnished with a ‘Japan’ cabinet and an ‘India Paper Screen’. Yet it was another East India Company import – Oriental porcelain – that was most closely linked to the taste for tea. 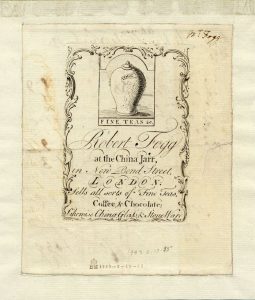 The first inventory that records the furnishings of Chiswick House, compiled in 1770, lists ‘six Japan cups & saucers’ amongst the large quantities of tea cups, coffee cups, chocolate cups, saucers, cream pots and sugar dishes stored in the Housekeeper’s Room and Lady Burlington’s china closet. Porcelain was often bought from the same merchants that supplied the tea. In 1796 the 5th Duke and Duchess of Devonshire purchased china for Chiswick from the purveyor of ‘Fine Teas’, Robert Fogg at ‘the China Jarr’, located in New Bond Street, London.

Lady Burlington would have taken tea at the mahogany tea table, kept in the closet next to her Bedchamber. The surface of the table was protected with a flat, lacquered tea board such as the ‘India Tea board’ stored in her china closet. As lady of the house, she would have probably been responsible for measuring out the expensive, black or green, tea leaves from canisters kept in a lockable tea chest. The tea was measured into the teapot and, judging from the inventory, she had more than twenty teapots at Chiswick to choose from. A servant would have brought in the hot water in a tea kettle, which was then positioned on the mahogany kettle stand. Once the tea had steeped it was poured into the tea cups, which were small porcelain bowls without handles, and sugar and milk added. After drinking, any dregs were discarded into the porcelain ‘slop’ bowl. 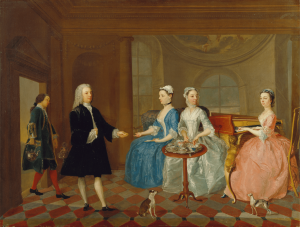 The tea table could be set up in any of the principal rooms at Chiswick and tea was enjoyed throughout the day, but particularly at breakfast and after dinner.  By 1811 Chiswick had a specific ‘Tea Room’. Located on the ground floor, close to the Groom of the Chamber’s room and Butler’s Pantry, this room was used for the storage of tea and coffee as well as the tea making equipment. The walls were lined with cupboards, containing tea boards, tea pots and kettles, as well as ‘an Iron shelf for Tea and Coffee’.  In 1796 the Duke and Duchess of Devonshire purchased a tea urn which could be used instead of a tea kettle. They also bought china from English manufacturers who responded to the demand for teawares, such as Duesbury & Co., manufacturers of Derby and Chelsea porcelain, and Worcestershire porcelain from Flight & Co.

We’re welcoming National Tea Day to the gardens on 21st-22nd April – enjoy a fabulous celebration of tea and find out more here.