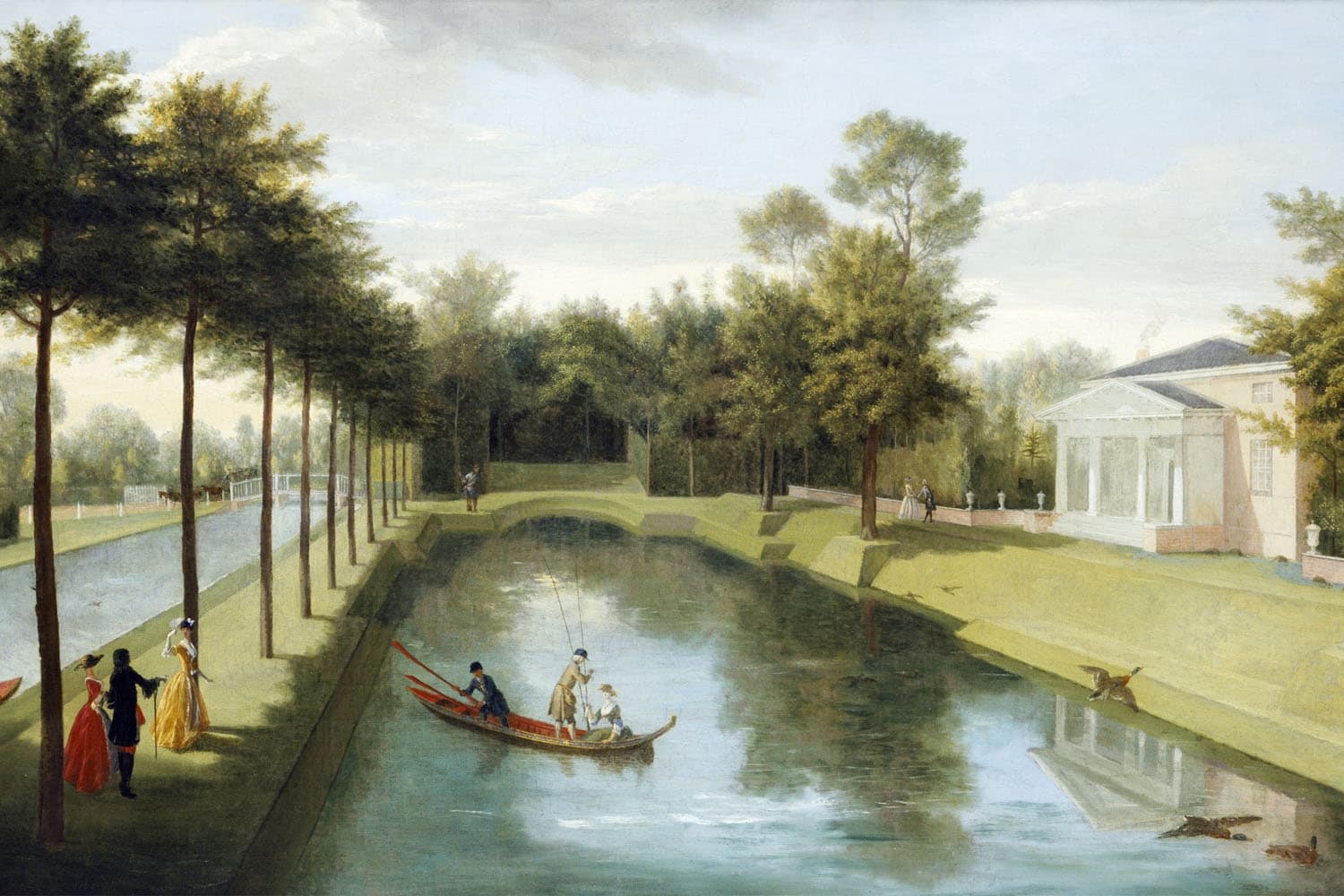 Chiswick House, the Pond and Temple

For years I have regularly conducted guided tours of Chiswick House (1729), focussing on architectural design and on key items in the house collection, which includes painting, furniture and sculpture. The core of the gardens that surround Chiswick House were conceived by the same creative forces that collaborated to produce the building, namely Lord Burlington (Richard Boyle, 1694-1753) and his close friend, the multi-talented designer William Kent (1685-1748). House and gardens at Chiswick are therefore closely related by design and an integrated work of art.

A faithful house guide would be remiss in not explaining this house-garden symbiosis, and so it is particularly fortuitous that currently hanging in the ‘Green Velvet Room’ are six paintings by the Flemish artist Pieter Andreas Rysbrack (1690-1748) which depict various views of the gardens between 1728 and 1733; these are the perfect ‘tools’ for initiating discussion of landscape design at Chiswick.

The paintings are generally regarded as representing Burlington’s rather formal and manicured approach to landscape design, prior to some of the more naturalistic enrichments that Kent was to contribute to the gardens from the mid-1730s. Many of the features depicted are no longer extant, so these are an important record and primary source for the appearance of the gardens at around the time Chiswick House was built. A gentleman dressed in red appears in some the paintings, apparently showing people around the gardens and it is tempting to suppose that this might be Lord Burlington himself giving a guided tour. I have selected three of these paintings to briefly outline here:

There were two rectangular ponds at Chiswick, neither of which exists today. This painting shows a straight line of equidistantly planted trees running along one side of a pond in a deliberately architectural manner resembling a colonnade. On the other side of the pond sits a temple-like building with a portico, derived from a design by Lord Burlington’s favourite British architect, Inigo Jones (1573-1652). The designs of Inigo Jones were very influential at Chiswick House itself, for example many of the chimneypieces were closely based upon drawings by Jones that Burlington had collected. A statue of Inigo Jones flanking the entrance façade of Chiswick House may have been carved by Pieter Rysbrack’s brother, the sculptor Michael Rysbrack.

I am the supervisor and principal guide at Chiswick House. I have a Master of Arts Degree in Architectural History from The University of Edinburgh and I've worked at Chiswick House for several years. As well as having a long-standing passion for the architecture and landscape at Chiswick, I'm fascinated by Modernist architecture, the art and life of William Hogarth and playing the guitar.